Since we last left, the Mean Gene Band was headed off to San Francisco to take part in a memorial tribute to legendary guitarist Ronnie Montrose. It was a star studded event and the tickets sold out within 10 minutes of going public. It just goes to show how much he was truly loved and to be forever remembered. The concert was held at the Regency Ballroom, downtown San Francisco built in 1909, the event took up all three floors of the venue. The downstairs artist green room, middle floor main concert, and upstairs lodge was the VIP party area with closed-circuit TV viewing. 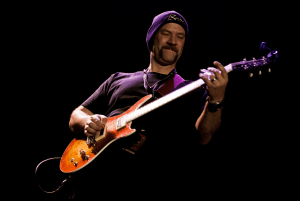 With a little more than thirty days notice, all artists began wood-shedding as show plans came together. For myself, I was assigned to a tune written by CJ Hutchins in which Ronnie played lead on CJ’s record as well as recorded it again on Gamma 4, I’ll refer to it as the guitar builder tune as both CJ and I were Ronnie’s long time guitar tech guys. I have never been much of a slide guitar player so I viewed this as Ronnie’s way of telling me to bone up my buddy and take on and refine a new skill set which I viewed as a very welcomed challenge.

The weekend for us started out on a Thursday morning as we all converged to The Plant recording studio in Sausalito, CA, famous for the 1st Montrose record as well as Sly and the Family Stone, Jefferson Starship, Joe Satriani and many more. We rehearsed in what the guys referred to as Ronnie’s room with Neil Schon, Steve Smith and Ricky Phillips knocking it out in another room. There was a Bay area film crew doing interviews for future DVD release as well as creating clips for the local news channels which I popped up in. Each band had roughly a two hour rehearsal and then it was all left to show time. But even at this point it all felt rather surreal.

Friday morning comes around and we get down to the venue to get a gander at all. A line outside the building started at 8am with fans hoping for a chance at an extra ticket. There were a lot of volunteer and donated services, HDNET providing video services for a future free viewing, Guitar Player magazine covered program expenses, most all musicians donated their time and DVD proceeds to the family. But Jim Douglas, Ronnie’s agent was the storm trooper who pulled it together and made it happen with a lengthy support crew that did it all for the family graciously donating their time.

Then the time came for me to meet up with Ronnie’s guitar “The Beast.” When asked which guitar I wanted to play I knew it had to be “The Beast” as she’s a beautiful guitar and built out of my garage and finished off while the first official Baker Guitars shop transitioned to Santa Maria CA. She had been thru some rough times with a busted headstock which CJ Hutchins happen to repair so she meant a lot to me having gone thru the school of hard rocks. The security on this guitar was rather steep with a lot of handling control required by the Insurance carrier with only a few people listed to be able to even touch it. I waited to open the case until I got up to the 3rd floor where our after hours party would be just because the room was so beautiful and the setting meant a lot to me. There were a few people moving about the room decorating but rather quiet, I felt like we were alone for the moment as I walked onto the stage and laid the case down so I could do a string change. So many thoughts ran thru my head; these were the last strings Ronnie played on her. Even opening the case gave me goose bumps. It was as if Ronnie was doing a fly by saying, “What’s up Daddy-O!” In the glove box were two sets of his custom Dean Markley Helix strings 9-52, and some personal Ronnie guitar picks. The guitar built in early 1999 had seen a good few years on the road but you could tell she had been loved with just the right amount of age wear.

So next I am off to meet up with the hand-off person which was comical. I first run into John Hampton downstairs not knowing he’s the next guy and he asks me if he wants me to have him hold onto the guitar. I remark with some wise crack that if he knew what was in the case I might have to kill him. Shortly thereafter my main security contact informs me that John IS my hand off guy. It made sense as I had met John many times before thru Ronnie. Even before the show was over, John had to make the return with a local police officer escort back to the Montrose home.

The venue was nicely decorated with live auctions and various memorabilia, Space Station #5 lounge, constant photo clips on big screens of many facets of Ronnie and the people in his life. Ice sculpture of Ronnie’s guitar, open bar and some great catering by many companies, pillows tossed all over the room made it a very cozy hang in the VIP lounge.

There were many highlights to the night and the most heart felt was when BAM magazine presented an award Ronnie won in 1981 for best guitarist, which had been damaged throughout the years; restored it and presented it to Leighsa Montrose, and his daughter Kira.

The venue was packed to the max with roughly 1650 people in attendance which included all crew and artists performing. The main hall was a zoo although it had an amazing vibe the entire night. It was as if everyone was connected and sharing the love, as singer Jeff Keith so well noted during a Tesla performance of “Little Suzy,” written by Ronnie for their first record. My favorite was the Gamma set with Marc Bonilla handling the guitar position with “Voyager” the highlight, although Neil Schon with his rendition of “Town without Pity,” was simply beautiful. Sammy rocked it well with the original Montrose line up with Satriani on guitar.

The final set was the All-Star band which members changed most every song. Keith St John, Eric Singer, Tommy Thayer, Eric Martin and where our tune plugged in. For myself I had never performed in front of an audience of this size but was feeling rather calm under the circumstances, plus the rehearsal went great and felt real comfortable with each other. Unfortunately since CJ and I aren’t big rock star names you can find everyone’s tunes on YouTube, except ours … Steve Brown drums, Dan McNay on bass, CJ Hutchins on guitar and vocals, with Randal Scoles doubling up on vocal harmonies and me handling Ronnie’s slide work. I thank all of you for a wonderful time.

As for MGB, it was a very memorable night. We fired up about midnight; the room itself was very inspirational, like the living room of a gothic castle. We had Michael Lee Firkins band sitting in as well as Jimmy Paxson. The last song of the night gave me goose bumps and a tear to my eye as they did a beautiful version of “Connection” with Randall Scoles on vocals. Randall was the final singer Ronnie would slate to his band.

Everyone pulled it all together for the right reasons as mending any friendship wounds was also a meaningful part of the night. I sorta look at Ronnie like that “Six Degrees of Kevin Bacon,” game. I’m sure we could easily play this game with Ronnie as he has touched so many people in all walks of life. “Ronnie Montrose” may not be a common household name, but I guarantee you that everyone has heard him play and just doesn’t know it. So for those of you in the dark and like to indulge yourself in music history/trivia, do yourself a favor and YouTube or Google “Ronnie Montrose,” and you’ll find a history of great music that inspired generations of guitarists. So I hope you find as much joy in what you may learn as I have. There are so many great stories and musical diversity in all he did that it’s very inspiring. Also now available is the Ronnie Montrose DVD Live at Uptown and a 2005 Detroit Rock the Nation DVD with the original Montrose lineup. See www.ronniemontrose.com for more news and memorabilia.