Porter & Davies are delighted to announce more top-notch drummers have chosen to enhance their kits with either the BC2 or BC Gigster.

Flying the flag for the UK are Zak Starkey long time drummer with The Who and currently playing on their world ‘The Who hits 50!’ tour, Josh Devine the powerhouse engine behind pop sensation One Direction and Stuart Kershaw with multi-platinum selling OMD. Joining them are Jay Sikora (Paolo Nutini / Lianne La Havas), Scott Ottaway (The Searchers) and Andy McGlasson (Lady Gaga / Lionel Richie). Scott says on his website ‘the stool lets you feel the bass drum and bass player and I feel it has helped me transform my drumming. I’m playing quieter and not fighting to hear the bass drum. It really is like having a metronome in your body’. 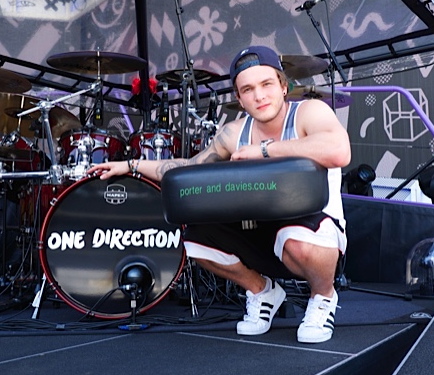 Just across the Irish Sea, session drummer and multi instrumentalist Gerry Morgan (James Bay), and Rick McMurray (Ash) have also decided to use Porter & Davies equipment. Rick, drummer with a band that has been named as ‘one of the top fifty to see before you die’ said, “What’s that big green thing added to my rig? It’s only the Porter & Davies BC2rm!!! I’ll be feeling that bottom end all night long!”

Meanwhile drummers from across the Atlantic are also using either the BC2 or the BC Gigster. These include Steve DiStanislao, with Dave Gilmour who will soon be touring the UK and Europe for the first time in nine years and Pete Parada (The Offspring) one of the busiest musicians on the punk rock scene. Ira Elliot (Nada Surf) the highly skilled drummer behind this power trio and Shannon Forrest (Toto), who has played on more Top 10 hits than any drummer in Nashville for a seven year period and earned the title as ‘the hit-maker’ have also recently become Porter & Davies Artists. Fellow Americans David Uosikkinen (The Hooters), John Paris (Earth, Wind & Fire) and Frank Zummo (Krewella / Gary Numan) have also had their drumming world changed by Porter & Davies rigs.

Representing the rest of the world on the Porter & Davies list of performers are drummers James Kottak (Scorpions), Mauricio ‘Fritz’ Lewak (Jackson Browne) and Christian Strybosch (The Drones).

To find out more about Porter & Davies, the BC2, BC2rm and the BC Gigster please visit http://www.porteranddavies.co.uk