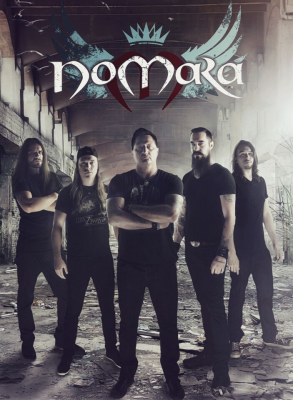 While their name is derived from the Buddhist demon Mara–lord of temptation and destruction–NoMara hails not from the Far East, but from the American Midwest where singer Kelly Burdge and guitarist/producer John LeCompt (Evanescence/Machina/We Are The Fallen) got together in the studio for fun and stumbled upon a massive and monstrous hard rock sound. Released in 2009, their self-titled debut album went on to sell 10,000 copies.

After some minimal touring, the band went on hiatus before reconvening in 2012 to begin working on new material. Fast forward to January, 2015 when the band dropped a 5 song EP titled, “…And So It Begins” and toured the Midwest alongside veteran rockers Tesla. What better way to hit the road than with one of the greatest bands of all time. Immediately diehard Tesla fans embraced the modern day hard rock sound of NoMara!

In just a few short months NoMara managed to turn the heads in the rock industry not only in the United States but also in Japan. GrindHouse Records in conjunction with Tower Record Stores Japan sold out of the bands EP in less than 3 weeks! In the U.S., NoMara will be releasing the thrashing new single “Sellout” to active rock radio. The 5 song EP “…And So It Begins” is just enough to wet the pallet of patient fans. Reviews of the EP have been incredible as the band has already released 3 videos to accompany the tracks Cheap Talk, Tesla, and Sellout! The song “Tesla” is a true modern day rocker saluting the bands of the 1980’s that paved the way for NoMara and other active rock bands. The band was fortunate to film the video for the song while opening for Tesla in a sold out Hobert Arena just outside of Dayton, Ohio. All the music of NoMara can be downloaded from the bands website, nomaramusic.com.

NoMara will continue to play live shows in select areas through 2015 and into 2016 while putting the finishing touches on their sophomore record. Rounding out the NoMara line-up all hail from Little Rock, Arkansas and include Josh Grissom on guitar, Thad Ables on bass (long-time friend of John’s going back to the Evanescence days as a guitar tech and most recently bassist in Machina) and Jack Larson a hard rock drummer that has played with Burning Everafter and The Vail.