2017 January NAMM show was drawing closer as I anticipated the arrival of the new Mesa Boogie Triple Crown amplifier that we were going to be using as a booth demo amp for my b3 line of guitars.

This new series of Mesa amps boasted the highest gain structure ever of any prior Mesa, MIDI switching, Reverb, Solo boost and many more features that really round out the word “versatile” built into this new Triple Crown. Many fans of the Rectifier series will greatly appreciate all additions as Triple rather beckons having three channels on tap and Crown exemplifies that it handles each channel with justice and authority. 50 watts of EL34 power to lean into what I always find to be my favorite zone to play in.

Taking a tour of its channels you’ll notice that each channel is laid out the same, Bass, Mid, Treble, Presence, Master, Gain with a gain structure switch labeled Tight and Norm on the High and Lo Gain channels, and Drive and Norm on the Clean channel. On the rear panel we have a Reverb level knob for each channel as well. The gain structure switch to me makes the amp behave on the Norm side more like a Marshall with a more dominant midrange appeal or in Tight like those Rectifiers with a more scooped mid and tighter bottom. Or on the Clean channel going from a super clean mode on Norm to a mild Drive which can give your clean channel a hairier response with a little more attitude like some good old Fender non master tube amps when pushed. 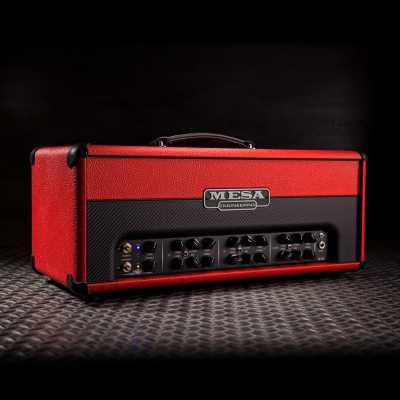 Many of you may have found in various amps you never get the best out of each channel as there is often a compromise either a great clean or a great overdrive channel. This amp focuses on making sure every channel is worthy of doing its job exactly as desired without compromise. I have always lived by a rule of thumb where any good amp you can basically start with all tone to gain controls on 5 then adjust to suit your needs. This amp did not fail me there and found quickly that almost any tonal setting was useable or should I say there was no setting that made we say yuck. So this allowed for a very fast out the gate approach at the starting line.

I have always appreciated amps that have some sort of a global Solo Boost feature as today it’s often up to us to mix PA systems from on stage with the near death of the soundman. The Mesa features a Master Solo level which balances well across all three channels and adjustable from minimal boost to face peeling levels.

To round it all out it features a DI Clone XLR out to go straight to a mixer or recording console and the speaker out can be switched off for a Silent mode. I have always been a fan of the PALMER PDI-09 Guitar DI that features a three stage voicing switch to emulate various cabs and the Mesa follows suit there for Vintage, Open back and Closed back cabs. You can take this a step further by mic’ing the amp and using the DI out simultaneously for different tonal layers into any mix.

Controlling the amp is about as easy as it gets, the standard foot switch features 6 buttons handling, three channels, Solo, Reverb and FX loop. Add the Midi function plus the Store feature you can call up any arrangement of its 6 button arrangements on the fly for less tap dancing during show time.

For the audio side we will refer to the video blog, but in simple summary this amp serves up clean to classic to down right mean and nasty in the best of ways while doing it all with a simplicity with the least amount of effort to get there and all the tools needed to manage today’s modern guitarist that needs a palette of tonal colors and effects to get the job done right the first time. It also manages to do its job at any volume level for a controlled stage maintaining its tonal stability throughout its overall volume range.

While also at NAMM I get approached by a good friend of mine that mentions I need to show you something that I think you’ll dig. So I get escorted to a private room invitation only to witness the birth of the HeadRush pedalboard. It’s built in Eleven QuadCore HD technology while also taking into consideration everything the competition wasn’t hitting or other brands were hitting at a massive cost to the end user.

I have always been a gear whore, simply meaning I love gear and audition to purchase a lot of it on our endless tonal pursuit of happiness to experience what the ever changing market is improving on to make our stage to studio life faster, easier to operate and excel in our audio experience. We have seem modeling rigs taking all kinds of new shapes to sizes from Fractal, Kemper, Positive Grid BIAS, Line6 getting a make over via Yamaha’s current ownership to other stomp based all in one amp rigs. Past few years I dove into the Fractal Axe FX XL as well as BIAS and pre and post dating using a Line6 HD500X with various real amps to individual stomp-box /loop based pedalboards.

My biggest problem with many all in one pedal boards is the common need to interface with a computer to get the most out of programming, backup to updates. So if you don’t get your patches worked out perfectly in private then tweaking patches during a show or soundcheck can be a major chore to stressful at times. I have a variety of needs in a pedal board, control my amps channels, have a host of patches, plus be able to access all effects within any given patch and now and then control a real time parameter such as delay time, reverb mix or whammy to wah-wah type pedals. With individual stomp pedal boards you fight all the extra patch cables, added noise issues to power supply’s, then programming a loop based pedalboard to handle your pedals and amplifier channel status etc…. anytime I switch to an all in one unit I often find noise issues are gone and you get a programmable gate/noise filter per patch. Plus all in one removes all power supply needs to a couple dozen patch cables so in that regard most things get simpler.

Ok now down to the hands on review side of the HeadRush. I am doing this review based only on the 4 Cable Method meaning I am not going to using any amp or cabinet modeling, I am only using the pedals effects placed into the front end for wah-wah, overdrives or compressors and into the effects loop for all time based effects like delay, reverb, chorus and a global EQ I use for solo boost.

The user interface – For those of you use to working with an iPad or Positive Grid BIAS you will find this a breeze as everything is large, easy to see and very touch friendly. Menus are very real pedal related and you twist real knobs to adjust various parameters. You can access every parameter within a simple swipe, no more going thru too many screens or way too many pages to options so in that respect very much like a simple stomp box pedal board, straight to business. Another feature that will save your ass from hitting a wrong patch is the fact that the pedalboard buttons all self label the self for what they are and it’s very clear large letters and you can alter their color, arranged order, which pedals are visible for added control etc…. 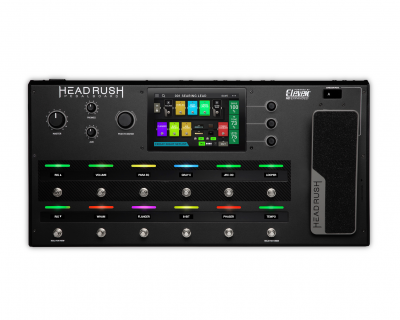 But let’s not stop there…. for tweaking anything on the fly simply hold down the button for a few seconds on the effect you wish to tweak, this enters you into a pedal editor where you see every function of that effect or amplifier etc…. and you can select the knob say Drive or volume, tone, delay time, effects mix etc…. and adjust it with the control pedal for a coarse fast adjust range or hit -/+ buttons adjusting each parameter in fine increments, when done just hit exit and everything just happened without using your hands once or still playing your song.

Looper – I must say this is the single best looper I have ever worked with yet to date. You can change patches, stomps to whatever you want to do and it does not stop the interaction with the looper so you could lay down beats to bass lines, rhythm guitar, melodies, special effects and it just keeps on building the layers with control on speed to direction and things I have still yet to tap into or master.

Everything about this unit is BIG on visibility to ease of use and functionality in a big way. You could probably tune from the opposite side of the stage the tuner is so big.

Updates could be a major buzz killer if you update some gear just before a gig and can sometimes render your pedalboard inoperable until you get on a gear forum and find out the fix and then some long or tedious interface to restore your unit to its once normal self. I think we’re covered here and haven’t noticed anything strange with updates which I must believe is due to the fact that we don’t have nor need any desktop/laptop software to manage the HeadRush, it’s all within itself and any USB interface is more for backing up files or a firmware update. Firmware updates I have witnessed so far have added a screen under Global Settings or added feature to an effect or other.

Their online user manual gets updated and is deeper in detail then the factory manual which is a normal routine for a brand new designed product as it goes through early release and revisions. Don’t let me stop you at the 4 Cable Method as this unit boats dual/stereo amp rigs and cabinets that’s can access any .wav IR files across developers that share the file extension for cab to amp modeling. For those experienced and happy with BIAS amp and can selections you’ll be at home here with plenty of options.

Unit acts and feels like real players were involved with its physical design for cable management with a cable channel underneath the unit as well as user interface functionality and construction. Granted it has to sound good first otherwise why bother but when you start with a clear audio chain with excellent visual, fast simple operation in a stout well built unit at a price under $999 for a pedalboard that can do all this, what! I call that a GrandSlam job well done, I look forward to all this unit will become as it has already made its way to my live gig rig and I know HeadRush has some cool future perks in coming updates.